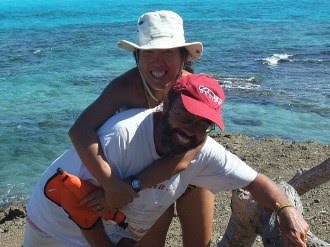 We are back in Brisbane after a few weeks in New Zealand - by airplane, not boat. A posting on New Zealand will follow shortly. Loved NZ, but more on that later. In any case, we are preparing Ainia for a departure in about 10 days time (~May 8th?), after all the work is done. We are treating our time here as a mid-circumnavigation refit, a time to fix both major problems and minor ones that the last 11,000 miles have produced. The things we are doing include: • The big one is taking the mast down to do several things. We replaced the standing rigging in Florida, mostly at anchor, and the change went very well, until we got to the final upper shroud. Could not get the spreader cap off and dangling in a bosun's chair and then pulling out to the end of the spreader did not allow much torque to be produced, so it stayed up. The rigging replacement was really precautionary since I could not determine when it had last been done. The one old shroud is still OK, but it will be nice to get it done. Also there is an aluminum wiring conduit in the mast that has come partly loose which has meant that all of the wiring inside the mast has been damaged. We will get the conduit reattached and replace all the wiring - not a bad idea since I think it is all original. Bristol's approach to wiring was not to use the modern-style, tinned wire, but to use wire that is much bigger diameter than is the norm today, so it is a reasonable compromise, but wiring does wear out in a marine environment so it is a good thing to get it done. • We have had normal sort of repairs and maintenance. The liferaft had to go for its every three years' servicing ($715AUD even after the sales tax exemption for foreign boats), the dinghy needed a couple of holes patched and a replacement towing ring on the bow ($390), the sails needed attention for various wear issues ($490). Don't know what the mast work will be but it will be pricey since we have to pay for a large crane to come to the marina twice. They don't take masts down here very often and they haul from about 1 meter below the masthead so the crane needs a long boom. In any case, we are doing our bit to help the Aussie economy. • We are also doing many smaller, less costly jobs - like repairs and re-waterproofing the bimini and dodger, engine maintenance, head maintenance, trying to stop a few leaks in ports and hatches, getting the electric autopilot to work better (we don't use if very often at all but it would be nice to have when we are putting up the whisker pole whenn a second set of hands would help a lot. We were going to get hauled but have decided to use a diver instead to clean the bottom (it is very bad), install zinc on shaft, and cleanout the throughulls that seem to have picked up barnacles. Can't do these things ourselves since the harbour is loaded with jellyfish and even if they are not the poisonous ones they are still not nice. Let the diver do it since he has full body coverage. We may get the diver to replace the cable on the centerboard as well (again this is preventative, not essential right now. Not getting much done today as it started to rain yesterday afternoon and by 9 am there had been 81 mm of rain (>3 inches) and it has poured all day today as well and will not stop until morning. This is supposed to be dry season too. The marine forecast was for 34 to 40 knots so glad we are here rather than outside. Routing There was a question asked about going to Chagos. There are a couple of places you can visit and you must arrange a permit beforehand with the British Colonial Office in London. The cost is 50 pounds sterling per week. We are only going to be staying there a week for a break along the way.
Posted by Bruce at 4:17 a.m. 3 comments: